Well, that’s not quite the story, but given the seemingly non-ending talk about a recession, you might think that economists are channeling Paul Revere’s midnight ride.

Yes, a recession is eventually inevitable, but is it imminent?   And what should we do about it anyway?

Analysts and short-term traders have become hypersensitive to any signs a recession may be looming.

Stock market volatility and the steep correction late last year, the recent slowdown in U.S. economic activity, and an inverted yield curve (On March 22, the yield on the three-month T-bill exceed that on the 10-year Treasury by 0.02 percentage points (U.S. Treasury Dept). That hasn’t happened since 2006) have all contributed to worries about an economic downturn.

Plus, the economic expansion is fast approaching its 10-anniversary. If the economy is still expanding in July, and odds suggest it will be, the current expansion will become the longest on record, exceeding the expansion of the 1990s, which lasted exactly 10 years.

Recessions are a part of the business cycle in a free market economy. But expansions don’t simply peter out. Expansions come to an end when economic and financial imbalances arise, such as a stock or housing bubble, or the Fed aggressively hikes rates in response to a spike in inflation.

That brings us to the question at the top of this month’s newsletter.

What Is a Recession?

Contrary to the more traditional definition, a recession is not defined as two consecutive quarters of negative real (inflation-adjusted) GDP. If that were the case, we would have narrowly missed a recession in 2001. Q1 and Q3 posted negative numbers. Q2 was positive (St. Louis Fed).

Instead, an organization called the National Bureau of Economic Research (NBER) has become the official arbiter of recessions. Founded in 1920, the NBER is a private, nonprofit, nonpartisan organization dedicated to conducting economic research.

The NBER defines a recession [[http://www.nber.org/cycles/r/recessions.html recession]] as “a significant decline in activity spread across the economy, lasting more than a few months.” It manifests itself in the data tied to “industrial production, employment, real income, and wholesale-retail sales.”

These are very broad categories. They are not tied to one or two sectors, which might be experiencing weakness at any given time.

For example, during a recession, we’d expect to see declining retail and business sales. This would lead to a decline in industrial production and a rise in the unemployment rate.

It’s not as if the NBER confirms a recession has begun shortly after it begins. It took nearly a year for the NBER to confirm the last recession. A similar delay occurs when the economy begins to recover, and the NBER is tasked with calling the end of the recession.

The Canary in The Coal Mine?

Economists have always had trouble forecasting an upcoming recession. A few get it right; most miss it.

But it’s not as if we lack warning signs.

The Conference Board compiles what is called the Leading Economic Index®, or LEI. It’s akin to Paul Revere’s midnight ride. It has historically warned of an impending recession, but the timing is in question.

There are 10 components of the LEI. These are leading predictors of economic activity:

Why do we call them leading indicators? Simply because they tend to foreshadow future economic activity.

Why 10? One or two might send out false signals. That’s less likely with a compilation.

Given the LEI, why is it so difficult to forecast a recession? Looking back at the last seven recessions (back to the 1969-70 recession), the lead time given by the LEI has ranged from 7-20 months ([[https://www.advisorperspectives.com/dshort/updates/2019/03/21/conference-board-leading-economic-index-expanding-in-near-term Advisor Perspectives]]). That’s quite a range.

Furthermore, there have been times when the LEI has given false recessionary signals, including the mid-1960s, the mid-1990s, the late 1990s, and during the recent expansion.

These “false positives” were temporary downticks. Nonetheless, the short-term declines could have been construed as a recessionary signal.

Kink In The Curve – Inversion

Recall the list of leading indicators. Number 4: the yield curve.

There are times when the yield curve inverts meaning shorter-dated bonds yield more than longer-dated bonds.  The last seven recessions (going back to the 1969-70 recession–using NBER data and data from the St. Louis Federal Reserve) have all been preceded by an inversion of the yield curve. We must go back to 1966, when a brief inversion was followed by a steep slowdown in growth and not a recession.

Recessions have typically been preceded by major economic imbalances, such as a stock market bubble or housing bubble. Or, a sharp rise in inflation forces the Fed to aggressively respond with rate hikes.

For the most part, none of these conditions are currently present, lessening odds a near-term recession is lurking. Further, recent market action has been impressive. It’s not as if we haven’t seen some volatility, but year-to-date performance isn’t signaling an economic contraction is imminent.

Recessions Vs. Expansions: By The Numbers

I came across a piece that was recently put out by American Funds - Capital Ideas titled “Guide to Recessions” [[https://www.capitalgroup.com/europe/capitalideas/article/guide-to-recessions.html]] which had some interesting highlights I thought I would share with you:

And this great chart….. 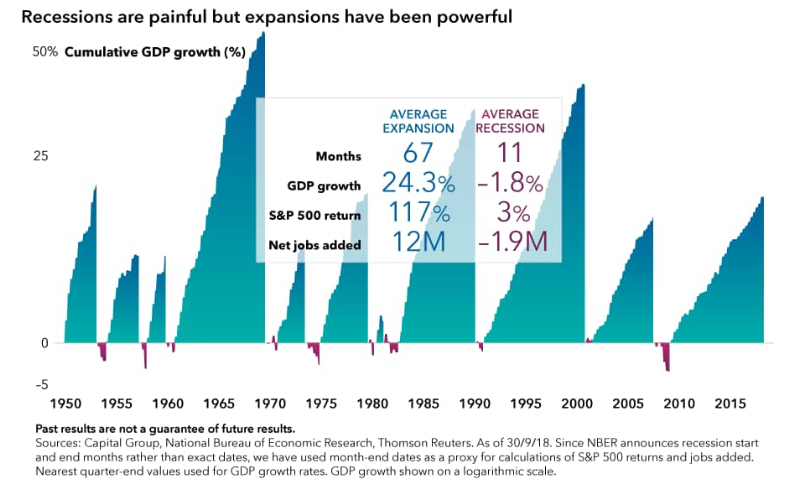 What really jumped out, and quite frankly surprised me, was the fact that the S&P 500 has had any positive return during the average post – 1950 recession.  To me it is a clear example of the fact that the equity market anticipates the future of the economy meaning that by the time it is common knowledge that we have entered a recession, the market may already be out of it.  If you are waiting on the government to confirm to you that a recession is over, you’ve probably already missed the turning of the market.

Recessions and expansions are part of the natural business cycle.  Us humans being wired like we are, tend to get out over our ski’s in the good times and overly pessimistic in the bad times.  Our job as your advisors is to keep you focused on your long-term goals and to steer you down the path with the highest possibility of success to achieve them.

Let me emphasize that it is our job to assist you! If you have any questions or would like to discuss any matters, please feel free to give me or any of my team members a call.

As always, I’m honored and humbled that you have given me the opportunity to serve as your financial advisor.


This is being provided for informational purposes only, and should not be construed as a recommendation to buy or sell any specific securities. Past performance is no guarantee of future results, and all investing involves risk. Index returns shown are not reflective of actual performance nor reflect fees and expenses applicable to investing. One cannot invest directly in an index. DCH Wealth Management, nor any of its members are tax accountants or legal attorneys, and do not provide tax or legal advice. For tax or legal advice, you should consult your tax or legal professional. The views expressed are those of DCH Wealth Management and do not necessarily reflect the views of Mutual Advisors, LLC or any of its affiliates.

Check the background of this advisor on FINRA’s BrokerCheck.